Today we took a spin around town and stopped in at Camping World. Apparently we need some stuff there, new sheets and a mattress cover, who knew. They apparently have ones specially built for RV beds so they will work better than the ones we drug along from the house with us. After the shopping of course we had to head for lunch and just so I don't sound like to much of a retired person I won't mention how cheap we managed to eat (Heather) or where, you'll have to figure that out on your own. Then we were off to the South Mountain Park and Preserve on the south side of Phoenix. This is apparently the largest municipal park in the world and at over 16,000 acres that is not hard to believe. Although it is pretty rugged so I am not sure what it would be if it wasn't a park. You get quite a view from up here and this is one of the viewpoints that have been constructed over time out of what looks like native rock. 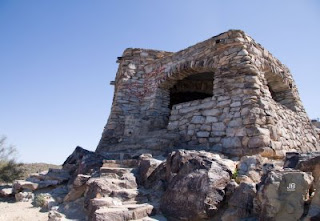 Now from this viewpoint you can look out over the whole Phoenix complex, a lotta folks down there (3.5 to 4 million), and way off to the top right of the photo is where our outfit is parked in Usery Mountain Regional Park. It is hard to imagine all of those folks living down in that valley where they need to import almost everything except the sand to build their foundations. 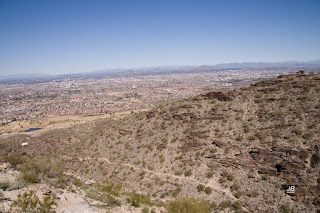 Now this is a much better shot of the Arizona I have come to love, not a person in sight.