Today was the day we decided to take a tour of the Apache Trail. We left from our camp at the KOA in Apache Junction and headed out on Highway 88. It is a truly spectacular drive although some parts of it may not have been graded since the last Roosevelt administration. However that keeps some of the tourists off of the road and makes it that much better for those of us who are willing to brave the rough spots. It takes you from Apache Junction up to the Roosevelt Dam along the Salt River. En route we passed Canyon Lake, Apache Lake and the Trail terminates at Roosevelt Lake. The Salt River project as they call it was constructed to control the Salt River and store water from the heavy runoffs for use at a later time. Now they say that this project is what enables the Phoenix metropolitan area to exist in the form it is today, so I guess I have my doubts whether that is a good thing or not. HaHa. As I mentioned it has some great scenery but it seems that Arizona has a somewhat hodge podge planning process for its power transmission lines and it is really difficult to get a good photo without having a criss cross maze of power lines strung through it. I have tried to get a selection of shots without wires. 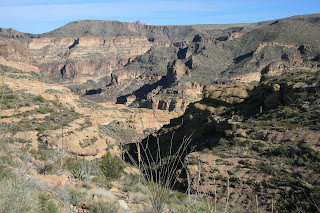 This is looking down from the Apache Trail into the Fish Creek Canyon. 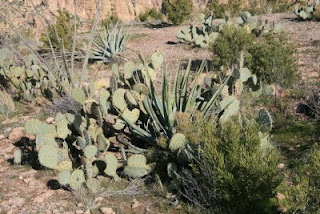 Some of the vegetation along the way. In the bottom of Fish Creek Canyon the sycamores were getting new leaves for spring. And in some of the high country there was a dusting of that white granular stuff you northerners call snow. 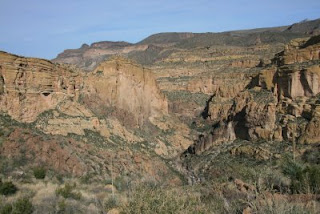 Above is another look at Fish Creek.
Below is the road dropping into the canyon and although it is narrow it certainly is not as steep as the guide books tell it. You would have no trouble negotiating it with an ordinary car. 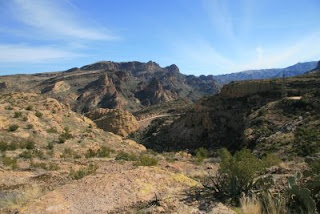 The Apache Trail was constructed to give access for supplies to the folks constructing the Roosevelt Dam back in the early 1900's and quite a trail it was. Must have taken a while for a team of mules to make its way to here. When we stopped at the overlook there was a learned fellow there who was explaining to all the tourists how this dam is unique in that it doesn't let much water flow into the river. The reservoir is only released to generate power and then the water is recaptured and pumped back up into the reservoir to continue the process. Interesting concept and maybe it explains why there are not large transmission lines taking power from here to Phoenix, but me thinks the reason there is limited release of water has more to do with the last few years of drought than some Arizonian form of perpetual motion. In fact I read in the newspaper just this week that they will be releasing water at a higher rate as they have had a good run-off this year and have reached the point where they let water go so as to have some storage capability for flood control. You have to wonder where some folks get their information from? Here is the dam. It was just recently reconstructed as until a few years ago it was much shorter and actually made out of blocks rather than poured concrete. 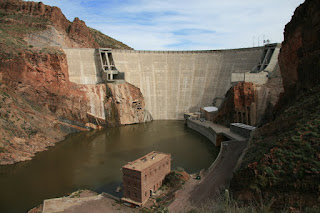 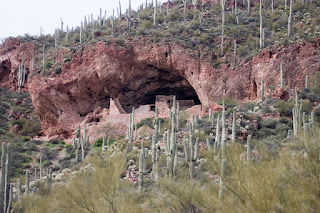 This is a room with a view along Roosevelt Lake at the Tonto National Monument. It was quite a climb up there so we opted to let the lense do the walking. 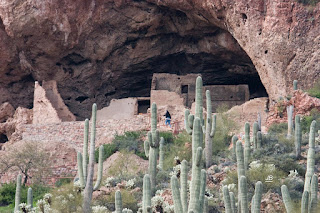 It is certainly a beautiful drive one that should be on every visitor to the areas to do list. And just imagine what a quaint little village Phoenix would be without the Salt River Project.