Down the Road from Dogpound 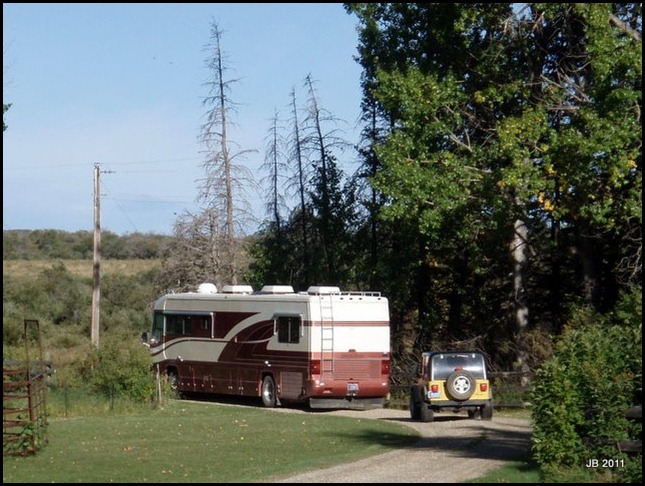 All good things must come to an end, but it is not goodbye, just see ya later. Mike and Janna were off down the road from Dogpound heading south. As Janna said yesterday this time had to end, her and Brenda matching each other meal for meal, and soon Mike and I were going to have to head into the big city and buy some bigger clothes. We had a great time wandering around northern Alberta and sharing stories and good times. They snuck into the country through British Columbia but it didn’t take long for them to make the jump to Alberta and with that pink camper and the bright yellow jeep pushing it, it was not long until we intercepted them. After that they couldn’t shake us and finally gave up and let us drag them back to Dogpound North. We love sharing our country with our friends from south of the border and it gives us a great excuse to revisit some of the great spots in Western Canada. So keep that in mind if you wander north of the Medicine Line you are liable to be intercepted and hauled into our northern lair. It is the least we can do to say thanks for sharing your country with us in the winter.

Once they headed down the road it was not to long until Blue, Willow and I headed off to meet Caron at her barn to join in with their trail ride. We just headed out from the barn and wandered around in the forest to the north. Although it was surrounded by highways, it was a great spot and we had a good ride. And then it was back to the barn where they were having smokies. Not hot dogs Janna!

Willow is staying at Boyce’s barn this week so that Caron can work with her to get ready for the gymkhana next weekend so Blue and I made the drive back home alone. Brenda was at it again though and soon after we got back it was time to eat again. Now I was quick with the camera but not quick enough that the cook didn’t already have a piece out for a test. Homemade “Dogpound Special” and good as always.