We are still in Rockport, much to our surprise, as yesterday there was a Tornado warning here and Brenda was sure we were going to be carried away to parts unknown. As you all know trailer parks always seem to be in the path of these things, so we pretty much, as my friend Joe says, have a bulls-eye painted on our backs. After all the excitement and dire warnings on the TV the clouds parted and the sun came out with the birds singing. Dennis next door managed to take some photo’s of our campground so if you want to see the river running through pop over to his blog and have a look.

Earlier in the day we had some excitement of a different sort. When we first arrived here there was an elderly couple and their son (we think) setting up a trailer in the site next to us. They built some wooden steps as the older gentleman had trouble negotiating those RV type steps and then spent a couple of days cleaning it up and getting it ready to serve as a summer get away. They live in San Antonio and this was their place at the beach. Well it turns out the trailer, unbeknownst to them, was stolen. They had apparently bought it from someone who didn’t really own it so the Aransas County Sheriff and his boys descended on it this morning. They were crawling all over and under it checking serial numbers and then climbed inside through one of the storage compartments to check out the interior. I guess they had already informed the older folks of their bad luck. Too bad it always seems to be elderly folks who can ill afford it that these kind of things happen to.

Bob and Molly popped over as they were making their reservations for next winter and were in the park anyway. I really think they just wanted to see what kind of calamity was happening around the Brown camp today. We seem to always have some kind of entertainment going on here, sheriffs posse’s, tornado’s, etc.

Later we took a run down and across the ferry to Port Aransas today. Brenda loves to ride the ferries to and from Vancouver Island so is always keen to go anywhere there is a ferry ride involved. I think she was surprised and a little disappointed when she realized that the ride is about 3 minutes long and just goes across a shipping channel for about a ½ mile. We took a drive on the beach while we were over there and then proceeded into Corpus Christi. Just for Mickey who is always wondering what it is we are eating, we went to Olive Garden where I had the very healthy Soup and Salad special and Brenda had the salad and 3 appetizer special. I had to help her out with the appy’s though as my body is better adapted to handle all that cholesterol than hers. After that we ran over to Sam’s Club to pick up a couple of things we needed (nope no paper towels, Moss) and then headed back to Rockport. We sure didn’t want to miss out on the tornado warning as I mentioned earlier. I know some of you are just waiting to see what kind of lunch we had and how cheap we had it, but remember Corpus Christi doesn’t have a Costco and Sam’s Club just doesn’t know how to make the free sample thing work for lunch so we actually have been dining in a lot of restaurants and eating the same food you unretired folks are eating.

After the tornado and the minor flood, Brenda and I thought we should give this geocaching thing a whirl, so to speak. We downloaded some caches and found one real close to our campground here. Off we headed with GPS in hand for a short walk over to find this thing. Well as it turned out Flip Flops were not the order of the day. There were a few thistles and a lot of vines that snag my feet and cut them just like wire cuts so I think that when we go to find that cache again we will have better footwear and maybe find a less direct route. Not surprisingly when I went back and read the notes on this cache they said specifically “don’t wear flip flops or shorts when heading here as there are cutting vines around”. Damn I hate to read the instructions before doing something……lol. So to date we are cach’er 1 – seekers 0.

Friday we just hung around the campground most of the day, except for a quick trip down to HEB for some fixin’s for dinner. Bob and Molly joined us this evening and we had a great visit with them. Molly brought with her, the most delicous crab cakes, I know Brenda was asking about the recipe and I sure hope she got it memorized as we certainly will want to have them again. They are heading off tomorrow so for the first time since we got to Kerrville there will be none of the Dreamers close by. In fact we were having such fun visiting that I actually forgot to take some pictures so here they are just before Bob drove off blinded by the flash into the night. And for those of you who are party to the earring story you can tell it was the left one that we found here later. 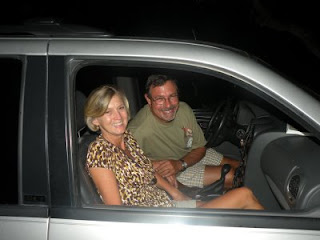 This just a shot of the park here, especially the Canadian section. Those are the Langs and our Jeeps parked off in the distance. The last few days have seen a steady stream of "Winter Texans" heading out of here for points north. 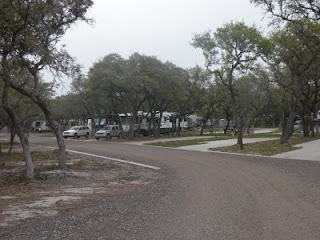